The Rogers Family – 100 Years Of Watching The Hammers 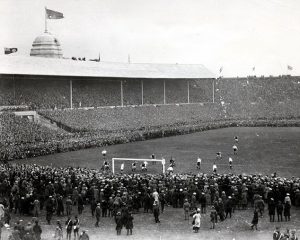 I was moaning about how things are not the same since the move and how the club are willing to forget our past. I was asked ‘West Ham and your family, what does it mean?’

Well, my Grandad was at the 1923 FA cup final. He worked on the docks, for a company called Green and Siley Weirs. They had an agreement with West Ham to take on young players for an apprenticeship. So if football came to an end they had something to fall back on. Grandad had five sons and my Dad, Donald, was the middle one, born at home 19, Loxford Avenue, East Ham, which (thanks to Google Maps) I know is 310 metres from the South Bank at Upton Park.

Ernie was the eldest. He has told me that his Dad would take him to Upton Park from 1946 onwards and put him in the cage on the Green Street side of the North Bank, with all the other kids. Then he would go and stand with his mates in the middle. Ernie wasn’t allowed to stand with his Dad until he was 17. Ernie played for East Ham Boys and he said that a few times they played West Ham Boys at Upton Park before a West Ham game, for the Director’s Cup. When the chicken run was rebuilt they got season tickets upstairs North Bank end in line with the penalty spot. Grandad had his until 1979 and Ernie kept his until 1998.

My Dad, Don, always told me that, if he didn’t have enough money, he knew where the loose boards were at the back of the Chicken Run and he’d get in for nothing. He took me to my first game on 2nd September, 1972. Manchester United at home, a 2-2 draw, but I saw my hero Bobby Moore.feelHe also took me to the Den Haag and Eintract Frankfurt games in 1976. But when I could raise the money I would go on my own.

We lived in Welwyn Garden City in Hertfordshire, so it could be a bit of a journey for a kid. Lads at school would say come to Arsenal or Spurs with us. You know my reply. I remember Newcastle, Sheffield Utd., etc., etc. I would stand on the North Bank and near the end I would make my way down to the corner flag. At the final whistle I would run down Priory Road and along to Loxford Avenue. My Nan would be waiting and say get in the corner behind a chair and don’t get in the way. I would position myself so I could see the TV and watch the teleprinter results coming in. My Uncles and all their mates would arrive and drink tea and eat whatever my Nan had set out. She would sort of moan about everyone being there, but she loved it. When the traffic had died down they would go and a short while later I would go along the Barking Road, past the Boleyn, up Green Street and to Upton Park station.

One game I do remember was on 1st November, 1975. I went to a reserve game. My Nan clipped me behind my ear as I left 19 Loxford Avenue. The reason? I looked like a hooligan because I had a silk scarf hanging from a belt loop of my jeans. While we watched the game it was announced that West Ham had gone 1-0 down at Brum. Cue boos and ‘oh no here we go again’. Then another announcement, we had equalised, ‘yes!’, then another, then another. West Ham eventually won 1-5. Miracles do happen. I remember queuing up on a Sunday morning for 1975 Cup Final tickets with my old man and the youngest of the five Brothers, Edward. My Dad drove to Wembley, we parked and walked the last couple of miles. We met my Uncle Ernie and swapped tickets with him. We got seats with my Grandad and some of Ernie’s friends. There were six of us in a line. Half time a small bottle of whiskey got passed along the line, I took it and got a whack round the head for my troubles, I was 12.

One story, that Ernie told me about Grandad, that I love, is about the Hillsborough semi final 1964. He said six of them were together and when they got back on the coach home, my Grandad stood in the aisle. He produced a bottle of whiskey, held it in the air and with tears streaming down his cheeks he said ‘I’ve waited over 40 years for this, we’re going to Wembley’. January 1977, Villa away in the cup, we got walloped. By this time I was proper hooked. That season I went Sunderland 0-6, Newcastle 0-3, Middlesbrough on a Friday night. In fact from December to the end of the season I missed one game, Leeds away on a Tuesday night. I was 14. I don’t know how I did it. That was the season I met and was taken under the wings of and older group of lads from Welwyn. The looked after me all the time, they were about 20/21. Who would have known that 40 odd years later we would still be solid mates, that’s West Ham for you.

I now go with Edward, the youngest Brother and his son, my Cousin Chris. My two Daughters have been a few times over the years but are not quite as soppy as their old man. But they are threatening to pay a visit to our new stadium. My Wife has been once, Coventry at home, we were 0-3 down at half time, she has never been back. There were periods I didn’t go a lot. The famous 1985/86 season I went to 2 games and I lived in Manor Park. We had our first born and my priorities were different. But it has always been with me. I can’t help it. I just feel that the club has changed so much – Especially since the Stadium move.

Their ‘rebranding’ seems to be pushing people, like me and my family, out. I think it’s because we don’t spend £100 in the club shop before the game. My Uncle Edward, Chris and me still go to the home games but so many of our friends have packed it in since the move after decades of following The Hammers.

My hope is that Hammers United can apply pressure, so the club try harder to remember our traditions and heritage, from the past that make West Ham great, not just my past but all our pasts, because we are all West Ham aren’t we?!?!