A show of strength, and in numbers at our first protest on 18 January proved that the famous West Ham Support is still alive and well.

Some of our most respected fans were out, as generations of our supporters came together to remind the footballing world that our loyal support had not faded and died and that the West Ham faithful were once more standing up and being counted.

You will have seen reports today which try to demonise our supporters. They are disappointing, distasteful and cheap efforts at scaremongering. . . .and yet no mention of the simple fact that not one single arrest was made at our protest, as our support conducted itself impeccably.

That first protest was the catalyst for change, and how wonderful it is to see those in the free press who refuse to be intimidated with the threat of being “Sunday Supplemented” or having a portacabin press pass pulled, now sitting up and taking notice of the disease that has gripped our great club. Buoyed by our stories and campaign, they have embraced our cause, called out the club, and despite understandable concerns and a backdrop of legal threats, they continue to introspect what they seemingly perceive as a set of custodians who have increased their personal wealth, whilst failing their supporters and failing to deliver against promises made to them.

Hammer United remains humble, proud and privileged to serve you our membership, as your ranks swell to nearly 12,000 members. . .
. . . and to that 12,000 of you, we today say it is again time for us to mobilise and rally to the cause.

The custodians of our great club have treated us the fans with utter disdain.

It is time they realised, straight from the horse’s mouth as we say in the East End, that the lifeblood of the great footballing institution that is West Ham United has had a gutful of them.

Messrs Gold Sullivan and Brady. . . You are no longer welcome at OUR football club.

Hammers United announced some time ago that we would be holding another mass protest on the 29th February when we play Southampton at home, and after constructive and engaging talks with the LDDC, The Police and Newham Council, we can finally share the details.

We today call on not just our thousands of members, but on all members of all groups everywhere to join us. . . all West Ham Fans. . . All Hammers. . . United.

On 29 of February, make sure you leave home early. . . . catch that early train. . . miss that traffic. . . leave that pint on the side. . . and come and join your West Ham brothers and sisters as we rally right up to the Directors Gates and make our voices heard.

We will all come together at various meeting points along The Greenway and stroll, peacefully, leisurely, and in good voice, along its length towards the London Stadium. 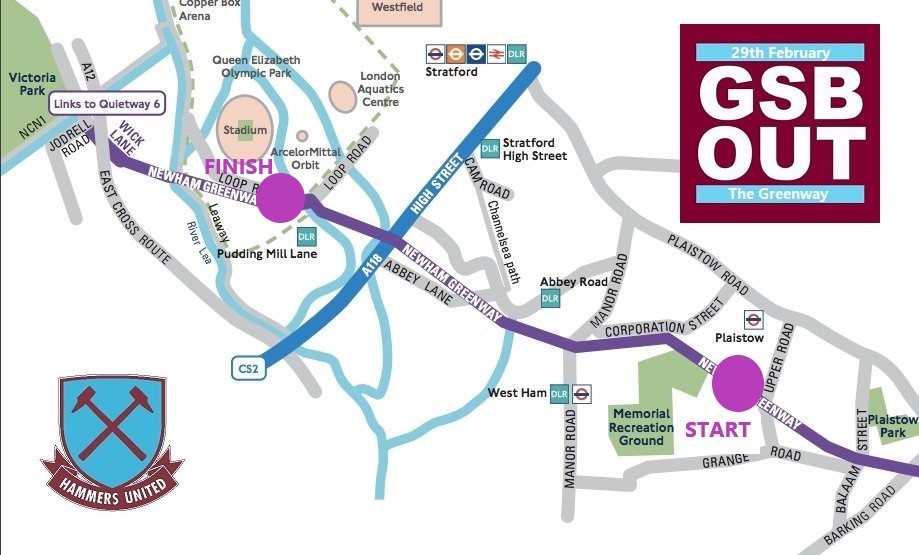 Hammers United will have marshals at all of these entrances to the Greenway.

Our stroll will end at the Marshgate Lane entrance to the ground, where a few words will be shared.

This great footballing institution was a gift to the people by Arnold Hills almost 125 years ago. . in memory of those who came before us and are no longer here. . . for the future generations whose birth-right of being a Hammer is being eroded by the day. . . let your voice be heard.

On 29 February 2020, the time will come for you to stand up and make a difference.

Rally your friends, rally your families. .This day will live long in memory..

God Bless You All