Stephen Timms MP has sent a letter to West Ham United Vice-Chair Karren Brady asking her if the club would be willing to open dialogue with Hammers United.

Hopefully this will lead to a positive outcome.

I have been contacted recently by Lee Rogers and Steve Cross, the Joint Secretaries of “Hammers United”, (c/o address supplied). They have explained to me that the group formed in March, is affiliated to The Football Supporters Association, and already has over 5000 members. It has a democratic structure.

They have explained their frustration that the Club refuses to talk to them. They claim that West Ham and Hull City are the only two of the 90 league clubs that, contrary to Football Governance Guidelines, will not engage with democratically elected supporters groups. They make the point that the Official Supporters Board which the Club does engage with is neither elected nor democratic.

Would the Club be willing to enter a dialogue with Hammers United ?

With all best wishes, 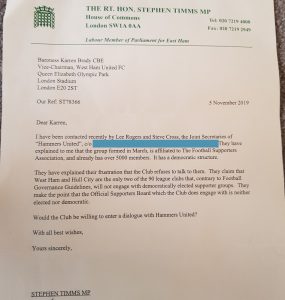